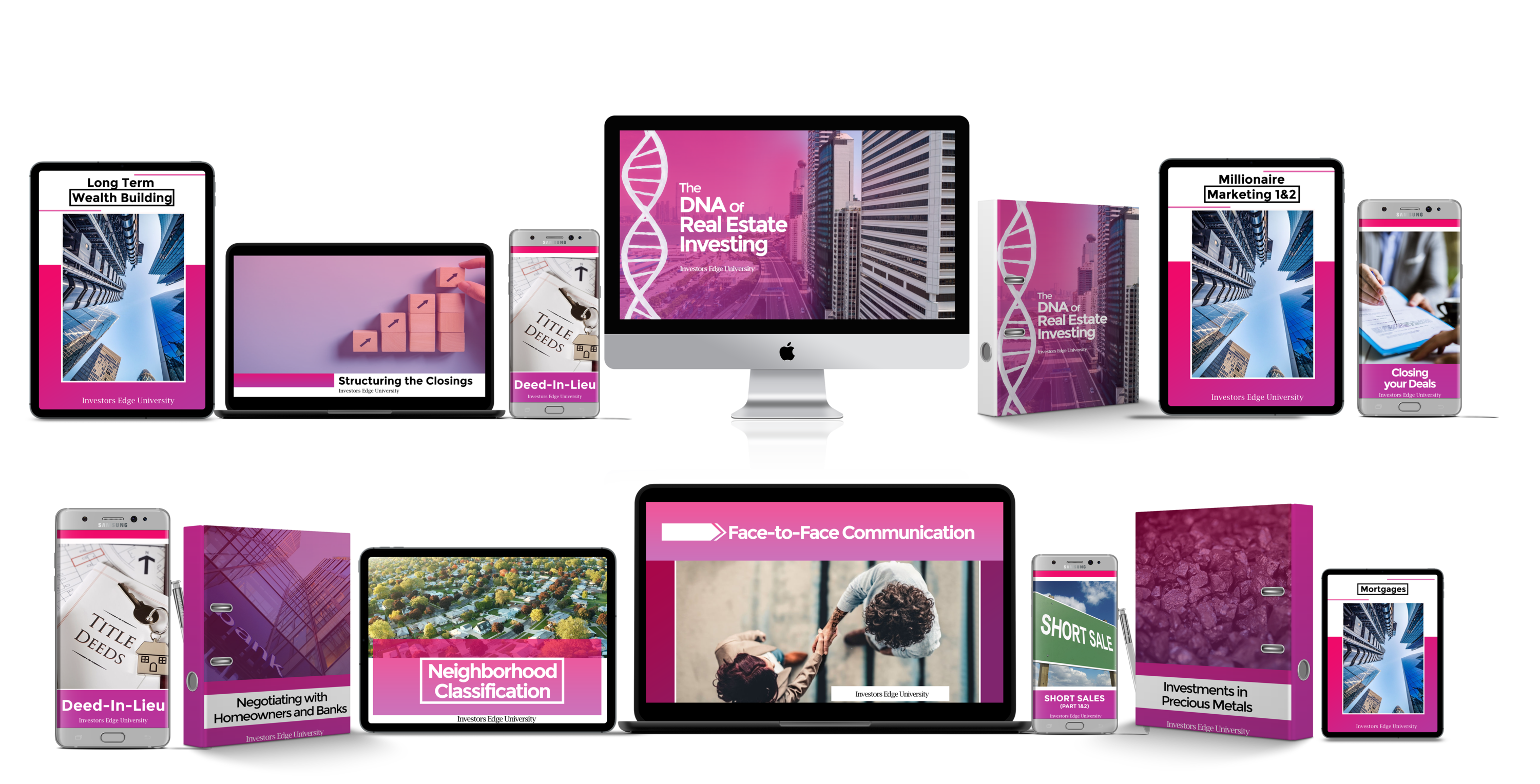 HERE IS WHAT YOU GET WHEN YOU INVEST IN THE DNA PROGRAM !

Discover how to set achievable goals and then putting a schedule in place to make those goals come to fruition.

Prospecting solves all of your business problems, it gives you choice, choice to who you want to work with verses you have to work with because you don’t prospect.

This is all of the tracking paperwork you need. Tracking 90-day cycles will give you the ratios of what is working and what is not. On this call, I will show you the importance of 90-day cycles.

Learning your Ratios…do you know yours? When you learn what you need to do every day, it makes it easier to achieve your goals. How many contracts do you need to sign to get a closing? How many people do you need to talk to before you get a lead? Good questions…that is why you need this call.

You will learn how to classify a house. What type of houses bring in the most amount of money? The classifications go from Class 1-5. On this training we go in detail on how to know what type of house you will want to focus on based on your skills.

After these three trainings, you will know what type of houses, what type of neighborhoods, in what areas that will profit you the most.

You will learn how to classify an area. What type of area will bring you in the most amount of money? The classifications go from Class 1-5. In this training we go into detail on how to know what type of areas you want to focus on based on your skills.

This training covers all aspects of bandit signs. You will learn the difference between Active Marketing vs Passive Marketing. We will be training you on the different types of inbound calls. Knowing what to say is critical to your success.

The fastest way to learn what to say is to get out in front of your customers. At that point, you realize there is so much to learn in communicating. This two-part program is going to teach you not only how to talk, what to say, but also how to approach your customer face-to-face.

Investors love to mail yellow letters, lumpy mail, postcards, do social media, run ads, put out bandit signs, however, they very rarely know what to say when a customer calls them. This training is going to show you why 99% of investors fail when marketing.

Learning and understanding the emotional mindset of your customer. What scripts and objection handlers are we using to parallel their emotion? You will find this call to be so beneficial to your real estate investing business.

Learning how to build a “Gold” buyers list is critical to a successful investing business. On this call, we are going to show you that working with less will net you more cash and less headaches than working with more.

Wholesaling and the Assignment of Contract ($599 Value)
Wholesaling is flipping a contract to another buyer. On this training, you will find out the ways to find these deals, structure the wholesale deal and how to fill out the assignment of contract.

Subject-To Options, Seller Financing, Dodd-Frank ($699 Value)
What is taking a property Subject-To mean? Are they legal? This is all about Option Four of the FED-UP Program. On this training, you will learn how to present this option to your homeowner. After understanding this option, it will make the option so easy to explain. Just by learning the seller financing and creating notes, this alone will propel your business.

A short sale is getting the bank to accept less than what is owed as payment in full. When a house is upside down, meaning the homeowner owes more than the property is worth, a short sale is the only option. This call covers everything you need for your first offer.

This training is Part Two of a Two-Part Series in Short Sales. This training is all about offer two and three. Learn what you need to keep negotiating with the bank on these offers.

This training is about option six, seven, eight, nine, ten of the FED-UP Program. Theses options are Bankruptcy, Deed-in-Lieu of Foreclosure, Selling with a Realtor, Refinance, Do nothing and lose the house.

This program gives you the three links that cover all three options in detail. These links will cover Options One-Ten in order. These trainings are a MUST!
The FED-UP Program will change your business in many ways. 1. Homeowners like FREE stuff. 2. It’s 31 pages and information packed with options. 3. You know become the expert in your field. 4. Homeowners will WANT to talk to you.

This is the total program that covers Subject-To deal structuring with no equity deals. In part one of a three-part training you will learn how to structure the deal. You will also learn how to qualify the homeowner to see if they are a good fit for this type of exit strategy. On this training, you will learn about the three profit centers and how to load one heavier than the others for today cash. We will also go through ways of finding deals through active marketing and mailing as well as structuring scenarios.

This is the total program that covers Subject-To deal structuring with no equity deals. In this part two of a three-part training, you will learn how to write the contract. You will learn why you have the homeowner write a hardship letter. You will also learn the
Authorization to Release Information document. Why you need a (POA) Power of Attorney from the homeowner and who will be the Power of Attorney?

This is the total program that covers Subject-To deal structuring with no equity deals. In this part three of a three-part training, you will learn how to create seller finance or a wrap-around mortgage. You will learn how to create a promissory note. What is a Deed-in-Lieu and why do you need it in this type of exit strategy? We will also
cover all of the steps in review to get a deal like this closed.

This training is all about “The Homeowners Agreement.” When dealing with homeowners you have a sales contract. What do you have in writing from them that covers the process of the transaction? The stuff you talk about leading up to the contract getting signed. What about the disclosures, where do they come in? What disclosure are they? You better know this type of training, if not you may end up in a law suit.

Taking yourself out of the liability of owning real estate when owning the real estate. Using a land trust, which in almost all states never gets recorded, is the best way to hold property. Why not use an LLC? Well, you need to be on this training to see why your LLC can be the beneficiary of the land trust. In this world today we are in a sue-happy society. The more you look like you own, the bigger your target gets on your back. This training will change all of that forever.

WHEN YOU INVEST TODAY, YOU ALSO GET THESE BONUSES:

LEARN FROM THE BEST BY THE BEST! 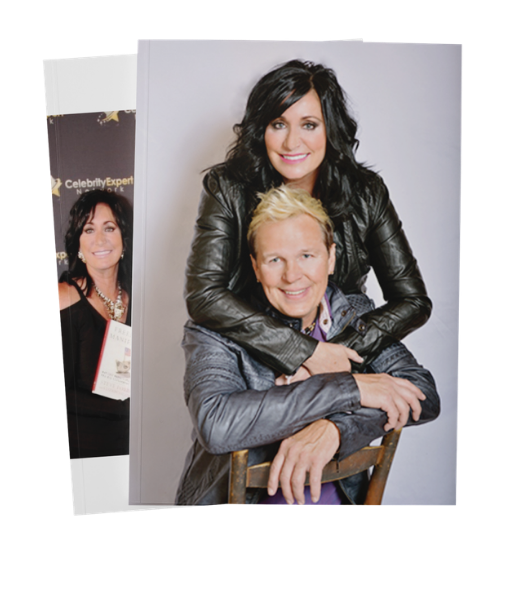 The Twyfords have personally bought and sold over 2,000 properties, invested millions of dollars in commercial property, coached 1,000’s of students through successful real estate deals, and have been making millionaires all over North America for OVER twenty years.

They come from a place of ethics, hold themselves to the highest standards, and they make millionaires!

They are the real deal! In fact, their business motto is – People Before Profits!

HERE'S WHAT OTHER INVESTORS ARE SAYING!